I want a better shell.

There are exciting projects to improve data-processing capabilities of shells, like nushell. However, I personally don’t use this capability of shell a lot: 90% of commands I enter are simpler than some cmd | rg pattern.

I primarily use shell as a way to use my system, and it is these interactive capabilities that I find lacking. So I want something closer in spirit to notty.

The most commands I type are cd, exa, rm, git ..., cargo .... I also type mg, which launches a GUI version of Emacs with Magit: 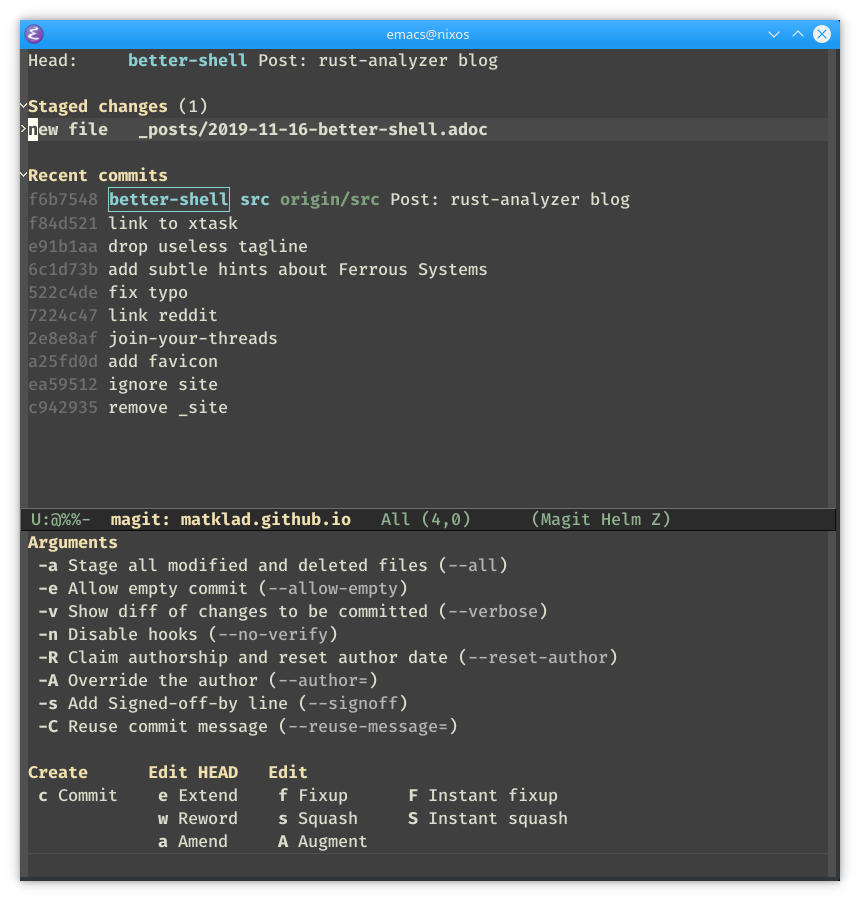 These tools make me productive. Keyboard-only input is fast and “composable” (I can press up to see previous commands, I can copy-paste paths, etc). Colored character-box based presentation is very clear and predictable, I can scan it very quickly.

However, there are serious gaps in the UX:

The last step is crazy!

Like, cargo test is being run by my shell (fish), the split is handled by the terminal emulator (kitty), which launches a fresh instance of fish and arranges the working directory to be saved.

As a user, I don’t care about this terminal/terminal emulator/shell split. I want to launch a program, and just type commands. Why cargo test blocks my input? Why can’t I type cargo test, Enter, exa -l, Enter and have this program to automatically create the split?

Additionally, while magit awesome, I want an option to use such interface for all my utilities. Like, for tar? And, when I type cargo test --package, I really want completion for the set of packages which are available in the current directory.

What I really want is an extensible application container, a-la Emacs or Eclipse, but focused for a shell use-case. It could look like this:

Isn’t it Emacs that I am trying to describe? Well, sort-of. Emacs is definitely in the same class of “application containers”, but it has some severe problems, in my opinion:

A "terminals are a mess" story from today. I wanted "kill other split" shortcut shortcut for my terminal, bound to ctrl+k, 1. Implementing it was easy, as kitty has a nice plugin API. After that I’ve realized that I need to remap kill_line from ctrl+k to ctrl+shift+k, so that it doesn’t conflict with the ctrl+k, 1 chord. It took me a while to realize that searching for kill_line in kitty is futile — editing is handled by the shell. Ok, so it looks like I can just remap the key in fish, by bind \cK kill_line, except that, no, ctrl shortcuts do not work with Shift because of some obscure terminal limitation. So, let’s go back to kitty and add a ctrl+shift+k shortcut that sends ^k to the fish! An hour wasted.